A tugboat built in the early 1950s for the U.S. Navy was scheduled to be extended and remodeled into a luxurious explorer yacht for its new owner. Accurate hull model and lines plans were required, but very few original drawings existed.

Geo-spatial Survey Solutions (GSS) and Deri Jones & Associates (DJA) performed a 3-D survey of the tugboat using their FARO Laser Scanner. To begin the process, DJA took 21 scans of the vessel while it was lifted out of the water on a dry dock.

They used FARO Scene software in order to register all of the point clouds together and create a clean, high-density scanned image of the vessel. The results were taken into DJA’s VX CAD system where details, such as rotation and squareness, of the model were corrected and then checked against the manual dimensions taken previously.

The level of detail in the high-density STL file was also very impressive. Features — such as plate seams, valve inserts and distortion resulting when frames are welded — were clearly discernible. Sections of this file were used in order to create a traditional naval architect’s lines plan, which showed transverse and longitudinal sections at different offsets on the hull.

Using VX, the high-resolution STL model was also used to create a detailed IGES surface model of the center section of the hull, which allowed for further investigation of the split point and the best method for creating the infill extension piece. Once the best location was identified, they created a new CAD surface that provided a fair surface to use as a reference CAD model. This was used to design the frames, girders and other structural requirements for the hull extension.

Due to the complex curvature of a ship’s hull, achieving a split line that allows for the continuity of shape throughout all areas is virtually impossible without the use of a 3-D model. The FARO Laser Scanner provided the needed 3-D data to allow informed decisions to be made on the best compromise between continuity of lines and ease of build. 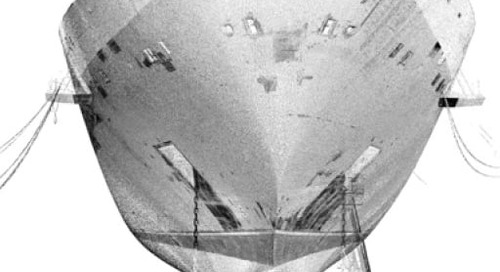 Scanning at depth – three-dimensional measurement of an ocean giant Time is money – that’s the underlying m... 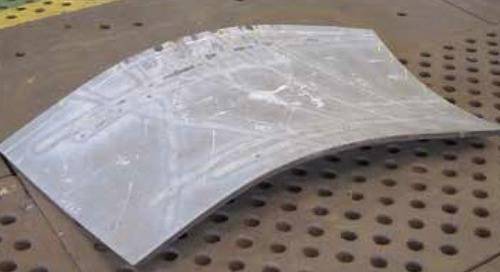